When this Door Mouse (Hayley Law) is a comic book illustrator whose second job is that of a burlesque performer, she better learn another occupation fast!

Available in select theatres and
digitally starting on January 13th

Door Mouse has plenty of Quinten Tarantino and punk rock vibes in its story about Mouse (Hayley Law), a comic book illustrator whose only real paying job is that of a burlesque performer. But when her colleagues get kidnapped, she becomes a gumshoe with a mission–to protect her sisters from the hood. They either wind up dead or much worse. As a result, the cops dismiss the problem as not worth investigating. Instead of waiting to be a victim, she’d rather be a victor in this quirky indie film smartly written and well directed by Avan Jogia.

This movie’s greatest strength lies in how perfect the neo-noir atmosphere is realised. Not only is it coloured in pastel lights, but also we get an appropriate sound design to make the world feel grungy. Additionally, the illustrations are animated to recognize how this lead looks at the world. This approach works to explain why she’s drawing from her life experience to create her comic book. The grittiness that’s visualised makes me wonder if we’ll ever see a sampler as a booklet when the home video release is ready. The sketches I see makes me think this artist is inspired by Robert Crumb.

END_OF_DOCUMENT_TOKEN_TO_BE_REPLACED

The documentary included in the home video release of Jordan Peele’s Nope is definitely essential viewing to desconstruct what’s best about this film.

When Jordan Peele’s take on alien invasion, UAPs, and animal mutilation, what can go wrong? The answer is that he won’t say Nope on what he believes is going on. In the back of my mind, I’m thinking his take may well reveal what’s going on that History Channel’s Secrets of Skinwalker Ranch is trying to uncover. Perhaps there is a sentience out there that wants to reveal itself, but it’s biding its time for when the time is right.

This filmmaker’s feature deals with more humane concerns, and it’s a rather long exposition. Despite the lengthy run time and build up to the confrontation, the scares he’s setting viewers up for are very satisfying and grim. Because this motion picture has to fully develop the characters. Any sense of whom the threat is—and what it represents as a wake-up call—doesn’t come until much later. His style is like M. Night Shyamalan’s, and the surprise is effectively good.

Thus, we can finally wonder if the Haywood family deserves their fate. Father is hurt, and the tale shifts to OJ (Daniel Kaluuya) and Emerald (Keke Palmer) attempting to save the farm from bankruptcy. Jupe (Steven Yeun) offers to help, but even has a past he can’t escape, and he’s the second banana who is helping the brother and sister team to deal with this alien threat.

END_OF_DOCUMENT_TOKEN_TO_BE_REPLACED

Next Exit offers ideas most paranormal investigators are keen on for years but ultimately it concerns two folks looking for the meaning of life.

To be fair, anyone going to see Next Exit because of Karen Gillan will be disappointed. She only has a small part. Instead, it’s about Teddy (Rahul Kohli) and Rose (Katie Parker), who think that they have no reason to live anymore. It’s hard to tell that they are depressed and wish to end it all. But after getting a call from Stevenson’s Life Beyond institute, they’re on a road trip to be test subjects about the hereafter.

Apparently, Research Scientist Dr. Stevenson (Gillan) discovered a way to track the transition of a person’s soul as it moves from life to death. Sadly, that means anyone wanting to be a Ghostbuster may no longer be needed. And anyone who wants to “move on” isn’t lining up! Well, not yet. The concept is brilliant because of my interest in the paranormal, because I often wondered if we can observe terminal lucidity. Or rather, what does losing 21 grams mean?

END_OF_DOCUMENT_TOKEN_TO_BE_REPLACED

Ultimately, this film is about preserving legacies, be it from an android or human… 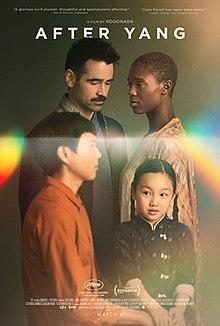 Trying to continue living without that special other by your side can be hard and life After Yang shows just how difficult it is for Jake’s (Colin Farrell) multicultural family to move on. This film is very meditative in examining who Yang (Justin H. Min) was prior to being acquired. He’s a techno sapien (an android). They were made to be assistants, butlers or maids for this future society.

This ‘bot was acquired to be Mika’s (Malea Emma Tjandrawidjaja) babysitter. She’s adopted and doesn’t know her Chinese heritage. Yang helps her, and their bond is heartwarming. But when he “deactivates,” Mika is confused. She doesn’t understand what death is. Her parents are having trouble explaining and this is a subplot in itself. What we see here is how Jake tries to get this robot operational again.

END_OF_DOCUMENT_TOKEN_TO_BE_REPLACED

Craig Luck and Ivor Powell crafted a wonderfully complex and sad tale about what it means to be alive.

Finch (Tom Hanks) may well be the last man on Earth. After a solar flare razed the Earth, the planet is devastated. He has Goodyear, his pet dog, to be his companion, but it’s not enough to give him hope. At first, he built a simple droid to assist in his day to day living, but he knew he needed another companion. The bot he builds combines traits and a look between Number 5, Wall*E and C3P0. But its programming could not be uploaded fast enough as the old man and his ensemble have to flee. There’s an approaching electrical storm.