As an experimental film, I’m rather enthralled by the use of repetition, colours and shapes used in the cinematography and video editing. There’s a meaning behind them all. I feel the gold and red represent spirituality and the life itself.

I can’t help but wonder if the Space Vampire is Carmilla? This film by Chris Alexander (better known for Queen of the Blood) begins the same. In Sheridan Le Fanu‘s own work, we see a mysterious woman (Ali Chappell) walking alone in a snowscape, towards an isolated house (presumably in Northern Ontario, where this filmmaker is from). That’s where the similarities end.

What’s different is in how this mysterious stranger in a tight black leather outfit is getting visions of who she was before becoming fully isolated to the entire environment she’s in. She’s no Black Widow either, but instead is just a person completely hypnotized. Another girl (Cheryl Singleton) is just as lost. However, it seems she is in control of her senses. This experimental movie seems perfect for Fantasia Fest, but for whatever reason, it didn’t make the cut. Thankfully Alexander got a distributor so fans of vampire and oblique films can take a look at the work for themselves.

END_OF_DOCUMENT_TOKEN_TO_BE_REPLACED

Denis Côté’s Ghost Town Anthology is a cozy supernatural character driven drama which, as the title implies, collects a few anecdotes together by those people who knew the person who killed himself at the start of the movie. 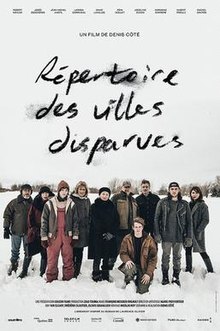 Streaming Online
at the Victoria Film Festival
Get your pass here to view beginning Feb 5th, 2021

Note: Available for residents in British Columbia. Please check local listings for availability near you.

Denis Côté‘s Ghost Town Anthology is a cozy supernatural character driven drama which, as the title implies, collects a few anecdotes together by those people who knew the person who killed himself at the start of the movie.

Everyone who lives in this small Quebec town of Sainte-Irénée-les-Neiges, population 215, knew Simon Dubé (Philippe Charrette). Nobody understood why he took his life and too much time was spent over thinking who he was and what happened which led to his suicide. When considering how icy hard the ground is (the tale takes place during the hard winter), he can’t even get a proper burial.

END_OF_DOCUMENT_TOKEN_TO_BE_REPLACED

Today is International Animation Day, and The NFB is releasing their 12 best pieces online!

The National Film Board of Canada has been very busy lately. Not only did they have works featured at the Vancouver Film Festival but also they’re following up with Animez-vous (Get Animated 2020)!

Today is International Animation Day, and this company is releasing their 12 best pieces online! Some old favourites–The Cannonball Woman, The Physics of Sorrow and Blind Vaysha–are in this collection, and afterwards, they will have one work, Old Dog, shown during Spark Animation Festival.

END_OF_DOCUMENT_TOKEN_TO_BE_REPLACED

There’s more than a simple existential crisis going on in Parallax. This film title is very telling because by definition, the term is about how an object can appear displaced relative to the observer when he or she even moves a few feet. In computer graphic design, it can create an illusion of depth. With this movie, it’s about reality bending in strange ways where Naomi (Naomi Prentice) feels out-of-place relative to the world moving on without her.

This lightly budgeted thriller shows it’s supernatural colours later. The visual composition is also telling, since it’s playing with the viewer’s understanding of what the word, parallax, means.

As an artist, Naomi says her paintings are like portals to other worlds. One touch, and she feels whisked away to that beach. In reality, she could be simply dreaming it…

END_OF_DOCUMENT_TOKEN_TO_BE_REPLACED

Marona’s Fantastic Tale is more than just a meditation on life—a reflection of what was—of a beloved dog fading away. Unlike The Call of the Wild which is based on Jack London’s novel of the same name, with a happy ending this animated movie is an original work written and directed by Anca Damian and her son, Anghel, which is much more sombre and philosophical.

The titular character voiced by Lizzy Brochere reveals all that she’s experienced in a Parisian town filled with colourful humans. Sometimes, what the pup dealt with in the beginning is not as telling as her other encounters. There are some weird people out there, and they are definitely caricatures of people exhibiting some weird vices.