Kitsune Tails developer Kitsune Games, in collaboration with MidBoss™, today announces Kitsune Zero, a prequel to the platformer styled after beloved classics which features diverse relationships and is steeped in Japanese mythology. Kitsune Zero will release as paid DLC that fully transforms Super Bernie World, the electoral activism platformer downloaded by more than 300,000 voters at the ballot box.
Additionally, Kitsune Games today reveal Kitsune Tails’ story of lesbian romance and giant jumping boots will leap to Xbox Series X|S and Xbox One in 2023 alongside the previously announced Nintendo Switch, PlayStation 4 and 5, and Steam and itch.io versions for PC and Linux.

END_OF_DOCUMENT_TOKEN_TO_BE_REPLACED

Salt and Sacrifice, the next installment in the million-plus selling soulslike platformer Salt and Sanctuary series from Ska Studios and Devoured Studios, launches on PC via the Epic Games Store in Early 2022 alongside PlayStation 5 and PlayStation 4 versions.

In the decaying Altarstone Kingdom, twisted Mages spread corruption through the land. As chaos descends, only the Marked Inquisitors – doomed warriors condemned to fight – can hope to halt the Mages and their wicked Magic. March through the Western boundary of Altarstone, hunting and destroying Mages before turning remains into powerful weapons and armor. Cast runic arts upon each weapon, manipulating energy to channel abilities like shockwaves towards foes.

END_OF_DOCUMENT_TOKEN_TO_BE_REPLACED

Jun’s skillful technique with the pen, brush and watercolours makes the pages leap out like a DreamWorks film.

“The Hunt is On” for Nie Jun’s Seekers of the Aweto. This herb heals any ailment a human has. Rumours say it also grants immortality, but only one out of many has that celestial ability. This plant grows on the heads of a chadolo, multi-coloured earth elementals and to remove it can incurs the wrath of Buddha. Locals believe they contain the soul of the soil that makes up the land, and they will do everything they can to save them.

Xinyue is a seeker of this plant since it’s his family’s business, but he’s something of a bard. He can play the drums and insects will swarm to him to do his bidding. They help him find an Aweto, but when he sees its alive and as cute  as The Child in The Mandalorian, he can’t kill it, and nor can he see it get harmed. The adventure he has with it is as wild as the said Star Wars television show and the Asian flavour lays in how exotic this locale is.

When considering this young lad makes a promise to protect it, to dishonour this land deity can mean bad things for his afterlife. His elder brother Qiliu doesn’t care; The family trade is to locate and sell it to the highest bidder. Volume one sets up the conflict still to come–it’s him and the plant, or him and his brother. The matriarch believes he’ll do what’s right, and it’s no surprise she passes on in this tale. Nobody can dictate what he can do.

END_OF_DOCUMENT_TOKEN_TO_BE_REPLACED

This movie was released in China during the Summer of 2019 and made limited circuits at film festivals the following year before a pandemic halted those plans. This prequel to the lesser known web series is at least more accessible and my hope is for Shout Factory to get the rights to the web series so both are globally available.

Available to order (when back in stock) at Amazon USA

No feline can be contained in the release of The Legend of Hei (罗小黑战记). Those adorable big eyes of the woodland sprite will win over many cat lover’s heart. Also, this movie about Luo Xiaohei (an elfin) has a unique charm to it which makes me wonder if there’s any merchandise to buy. There’s plenty to choose from on eBay, and the licensing potential is huge. When he’s competing against Kuroneko Sama (from Trigun), the challenge will be in brand recognition in North American markets.

This movie was released in China during the Summer of 2019 and made limited circuits at film festivals the following year before a pandemic halted those plans. This prequel to the lesser known web series is at least more accessible and my hope is for Shout Factory to get the rights to the web series so both are globally available. This title quickly sold out at the shops I checked out today, and even Amazon had trouble keeping up. There’s a book which covers the online tale. When this cat is proving hard to contain, I’m hoping Hei has that forever home in place. (Thankfully I was able to view this title digitally)

END_OF_DOCUMENT_TOKEN_TO_BE_REPLACED 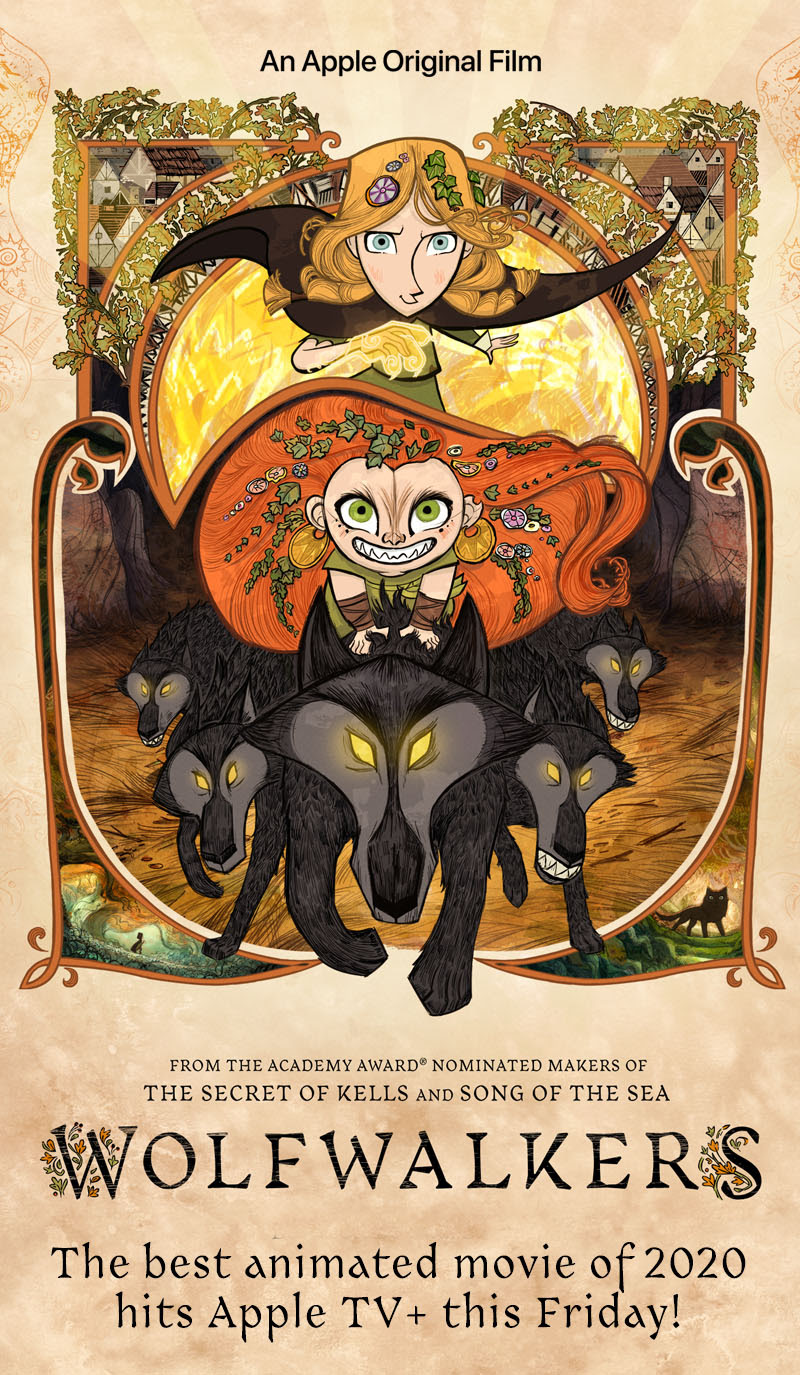 If you’ve missed catching this latest Cartoon Saloon work at earlier this year for one reason or another, now is the chance to see it at home. Available to stream is Tomm Moore‘s Wolfwalkers!

This beautifully rendered work sees man against beast. The wolf is feared throughout Ireland. But young Robyn sees beauty, and when she befriends a girl of the woods, Mebh, she discovers something else. The locals have a connection with the land and this lupine creature is not meant to be feared. It’s a glorious story about change and acceptance.

A full review can be read here.