Fans of Heavy Metal the Movie noiw have a remastered 4K and ATMOS presentation to thrill to.

Available to order on Amazon USA

Heavy Metal was the magazine to read during the 70s and 80s. The reason is that it was the place for talents to write or draw what they want–and not be restricted by censorship. In its original format, I was introduced to the works of Jean Giraud (a.k.a. Moebius). In the American edition, names like H. R. Giger, William Gibson and Harlan Ellison soon graced this publication.

Some of the writing and the artwork featured was once considered cutting edge; it’s very clearly a product of its time. The sexist works won’t hold up today for obvious reasons, and releasing this movie is mostly for those who are okay to the violence and adult themes portrayed. Fans of this anthology series have a remastered 4K presentation of the first movie to thrill to. An extra disc of the main and the second film on blu-ray was unusual. When comparing the prices of the Amazon USA and Canada edition, the former is the better place to order from.

In looking at the purchased physical release rather than an advanced online screener (that I had to wait to arrive by mail order), there’s plenty to like in this remaster. A bit of that soft grainy look is gone, and the better images come later in the film than earlier. Plus, for collectors, the Steelbook offering is a huge draw!

END_OF_DOCUMENT_TOKEN_TO_BE_REPLACED

The difference between buying the individual releases of the Ghostbusters film on Blu-ray and the massive 4K box set is not just the cardboard.

The difference between buying the individual releases of the Ghostbusters film on Blu-ray and the massive 4K box set is not just the cardboard. It’s a fairly big box that can be put on a display shelf, and as for the individually cardboard sleeved discs, perhaps moving them onto proper cases is better. Those can be placed on the video library shelf.

The collectable edition has a cool green-coloured light-up effect when you open the faux ghost trap to reveal the packages. The study cardboard construction can take some bruising, but I’ll be trying to keep mine as prestine (still with the plastic sleeve) as possible and dusting it more often than usual. The two bonus discs is the reason why long time fans are buying this edition over the single. I’m still going through them all (as time allows) and find reading the recreation of Don Shay’s Making Ghostbusters book from 1985 the big bonus.

END_OF_DOCUMENT_TOKEN_TO_BE_REPLACED

With the home video release, the tribute to Daniel Craig is a very worthwhile watch. I jumped to watching this full-length documentary rather than to see the film again.

Everybody has their preferred actor for James Bond. When he has No Time to Die, just who can play him next depends. There’s no formal announcement yet, but the producers promises there’ll be more in the coming years. I firmly believe just why he’s so long lived is because he’s not just one person. The sixty year franchise isn’t a proper passage of time. When one mission puts a version into retirement in the span of a handful of adventures–Never Say Never Again included–another takes his place.

Yes, James Bond is code name, much like 007, rather than the identity of a specific person.

END_OF_DOCUMENT_TOKEN_TO_BE_REPLACED 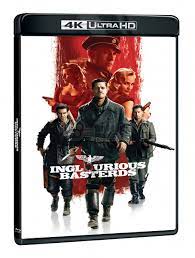 Just when Universal Pictures thought they couldn’t top their Special Blu-ray edition of Tarantinos’ Inglourious Basterds, they are tweaking their 4K release. Between this and an exclusive to HMV (UK), there’s also a Cine edition.

It’s been twelve years since the release of the special edition, and this film is worth revisiting since it helped make Christoph Waltz the star. He plays Nazi Colonel Hans Landa, a ruthless interrogator whom Lieutenant Aldo “The Apache” Raine (Brad Pitt) and his team are after. Well, sort of. There’s actually two plots by different organizations trying to do away with the leadership as the war continues on. It’s tough to decide who is worse, and that’s part of the joy of why this film is considered quintessential Tarantino.

END_OF_DOCUMENT_TOKEN_TO_BE_REPLACED

I bided my time like the Count for a proper 4K release, and Universal Studios have delivered!

Available to purchase on Amazon USA

The Universal Classic Monsters will shine this Halloween. All the icons from the Golden Age of Cinema from this studio–Dracula, Frankenstein, The Invisible Man and The Wolfman–have been given a recent restoration, and now they’re in 4K! The quality is beautiful, and the hard slipcase booklet is a sweet way to keep the discs intact. It features the poster used when the film first came out.

There’s some film grain and audio buzz, which is to be expected, in the product. I’m glad some of the celluloid feel is kept, while the frame rate is increased.

Anyone who collected these older works from one medium to another over the years knows the challenges involved. Whether that’d be from VHS to DVD to Bluray and now 4K, there’s only so much the preservation team can do before putting the original negatives back in the vault. Dracula will be glad, and The Invisible Man can rest in peace.