The remake of Stephen King’s Firestarter is not entirely a dud and has its moments which I liked.

The remake of Stephen King’s Firestarter is not a total dud. It has a few good moments where we see Charlie (Ryan Kiera Armstrong) trying to have a normal life in school. But when the kids are provoking her, it’s obvious what’ll next happen will be deadly. They’re only fanning the flames to awaken her pyrokinetic powers. Plus, she’s more likely to fight back instead of continue hiding.

She’ll have to make a hard choice to be a devil in disguise or an angel of vengence. Either way, the choice will result in people being immolated. However, in the grander scheme, this subplot doesn’t matter. Instead, it’s about the prisoners wondering what to do next after escaping the Gulag. Technically, this place is called The Shop, a place to train psychically gifted individuals to do their bidding. It’s easy to build upon this particular plot where gifted individuals (from other films, like Doctor Sleep) are brainwashed to fight for America. Charlie’s parents escaped from here, and whe was a baby when that happened.

END_OF_DOCUMENT_TOKEN_TO_BE_REPLACED

The Boss Baby has problems, and the only way to survive the FBI investigation is to go Back in the Crib. It’s a perfect continuation after Family Business.

The Boss Baby has problems, and the only way to survive the FBI investigation is to go Back in the Crib. Fans of this DreamWorks franchise are in for a treat as the entire Templeton family agrees to keep Ted (now voiced by John Paul Karliak) safe. He was living the life as a business tycoon. However, after finding his employees have been embezzling and framed him, he has nothing left.

This story arc doesn’t come into play throughout the twelve episode run and that’s very unusual. You’d think Ted would try to clear his name. Instead, he goes into hiding.

In contrast, the subplot about The Uncuddleables, a babysitter group who knows of Baby Corps, takes centre stage. They’re out to seize control. To see Ted deal with Baby Tina (Mary Faber nicely emulates Amy Sedaris‘ accent), who has taken over his role in the company, is the least of his worries. As a result, the hi-jinks are hilarious. Unless he and his niece get along, what’s going to happen next leads to more trouble that this institution can’t handle.

END_OF_DOCUMENT_TOKEN_TO_BE_REPLACED

This tale is tailored towards an audience already familiar with works like Paddington the Bear. 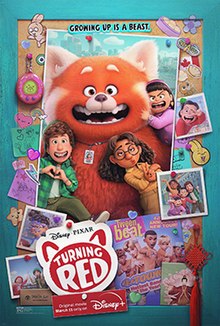 After the tremendous success with the animated short Bao in the awards circuit, Domee Shi and Julia Cho developed Turning Red as PIXAR’s next film. What’s created isn’t too different from past films, namely Brave, but in this case, we’re seeing a story set in modern times and in Toronto, Canada no less!

It’s tough to live up to a parent’s expectations. Dealing with overprotective mothers is perhaps the hardest and this film hits a very familiar tone faced by most during their childhood. And what’s shown isn’t necessarily restricted to just her, but also for anyone growing up in a Chinese family. It’s not about the cultural barriers, but also in honouring traditions. The screenplay nails those aspects down because I’ve lived through much of it myself!

END_OF_DOCUMENT_TOKEN_TO_BE_REPLACED

Not to be confused with the videogame of the same name, Portal Runner is an intriguing tale of sci-fi terror hell bent on making Christmas for Nolan’s family miserable. This boy (Sloane Morgan Siegel) is sometimes home alone and sometimes not. He can make use of mirrors (charged by a strange quantum device) to hop into a parallel universe. Each is slightly different from the other, and it’s not great when what’s unique in each are exploited.

The holiday theme about families coming together is gently explored in this modestly budgeted film. We see that everything is not always perfect between the 15-year old and his parents.

END_OF_DOCUMENT_TOKEN_TO_BE_REPLACED

Knowing the Netflix series isn’t required and I thought the movie release on a rival streaming network unusual. 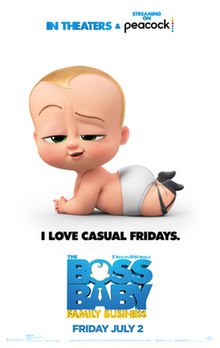 Playing on Peacock
and theatres near you.

The only shame with The Boss Baby franchise is the voice of Tim Templeton, one of the main characters, was recast. I would’ve preferred Pierce Gagnon from the Netflix continuation than James Marsden to take over. Tobey Maguire isn’t back because he doesn’t have the skills to sing. Usually someone else can fill in those bits but the producers opted to get a new performer. This information was reported on Yahoo News.

Unless Timmy’s voice cracked twice, he’s not likely to experience a second or third childhood since he never fully grew up. The hilarity isn’t tough to maintain. As a director, Tom McGrath‘s crazy sense of humour is exemplified when he was the brains behind Penguins of Madagascar. Ever since that series was retired, he’s been bringing his style to other properties. He directed Back in Business and shared creating the story with Michael McCullers. The short bursts of kiddie humour are off the rails—especially during the climax—and yes I miss the birds.