It’s rare to find hyper-fiction in any form these days, and Mothmen 1966 is such a game where it honours the tradition.

It’s rare to find hyper-fiction in any form these days, and Mothmen 1966 is such a game where it honours the tradition. This type of narrative is used in role playing video games in varying capacities. Sometimes, it’s just your traditional choose-your-own-adventure type scenario and other times, you can’t reach the end unless you follow that set path. In the games I’ve played, if you miss an important bit, it’s usually game over.

This game by novelist Nico Saraintaris and artist Fernando Martinez Ruppel, is a ‘Pixel Pulp’ more than the aforementioned style. And the defining details are in the 8 bit graphic design. It ranges from still images to a few frames of animated bliss. But as for whether you can beat the game, it means taking the time to read the many scrolling text pages, solve some puzzles–which includes card games (namely Solitaire) along the way–and surviving.

As a piece of hyper-fiction, it forgets what’s important early in the game. I had to click through every option because I needed to know every bit of the introduction in order to advance.

If I don’t pick up on specific details, the later parts of the game could prove difficult. I’m glad that I can define the save points rather than let the game decide. I’m okay with realising that I made a mistake and have to start the game from the beginning again. That’s part of the learning curve. 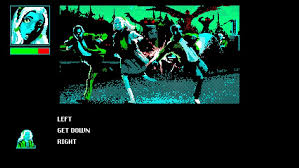 It was annoying to find that there’s some parts of the game where you have to play via trial-by-error to advance. But what if I did not want to know the story from another character’s perspective? I can’t avoid it. It’s like playing Media.Vision Wild Arms where you have to know all the key players rather than just being one hero. Here, you have to play as Holt, Victoria, and Lee. The story flips between these three, and the approach to how each of them tell their tale isn’t like in Bram Stoker’s Dracula. Most of the narrative is revealed through dialogue and whom they interact with.

The key takeaway here is that we have two-thirds of the game meticulously designed and groomed for those who love those old role playing games from yesteryears. The game design is different from those games from the era, with a top down visual design and where players navigate a maze. Instead, it’s very text based and is an evolutionary step past Zork, but not like Ultima.

When considering I adore reading and learning more about all the urban legends that’s out there, to have an adventure that plays with the ideas is perfect! We got Men in Black and the titular Mothman. I don’t have to say too much but that while the story is terrific, the other aspects could use improvement. It’s tough to be fully invested when navigating this world requires a lot more reading than I expected. A balance is needed to make this sub-genre of game thrilling.