The author Nagabe created a wonderful world and the animated adaptation of e The Girl from the Other Side is leaving me begging for more. 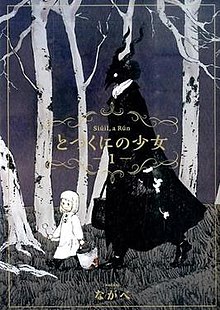 Playing at the Los Angeles Asian Pacific Film Festival at the Aratani Theatre @ JACCC May 13, 2022 7:00 pm (BUY TICKETS) and coming to Fantasia 2022

The Girl from the Other Side: Siúil, a Rún (とつくにの少女) is a tale that deals with several themes. One is about a battle between man versus himself. Another is concerning redemption. There’s a curse affecting nearly everyone and a blight destroying a kingdom.

Anyone infected turns into a shadow of their former selves and when a lone individual (later named Teacher) finds a young girl (named Shiva) abandoned in the woods, he can’t leave her alone. Strangely, she doesn’t succumb to the darkness as others have. This tale takes on a tone which deserves more films to fully explore, explain and resolve–or I can read the finished manga.

My preferences is with the former since the artistic design is rapturous and Rie Takahashi, the voice of the young child is so cute! Even if I was to look at the printed version, I’ll have her voice stuck in my head.