While Suicide Squad is not likely to integrate with the rest of the DCEU anytime in the future, I’m hoping this rework proves that making more Rated R films is a must. 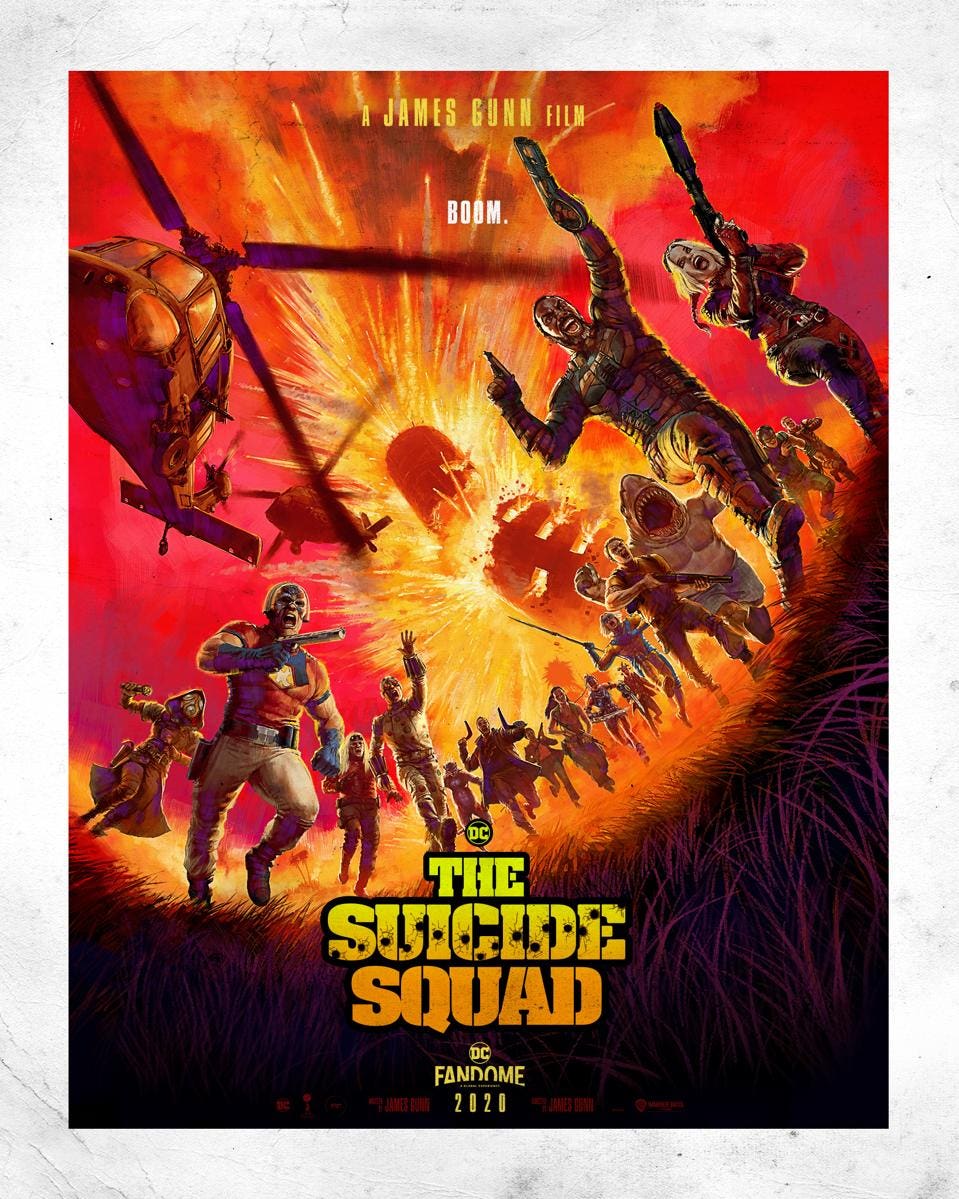 James Gunn has topped himself since he was given complete freedom to redo Suicide Squad. That 2016 film was great at introducing villains to do the dirty work that Uncle Sam doesn’t want to acknowledge, but isn’t all that memorable. This 2021 soft reboot that adds The to the title surpasses everything David Ayer attempted, and ups the ante. James‘ eccentric vision even includes a crazy build up to the finale typical for a Troma film (where this filmmaker got his start). Whether Ayer had to abide by the rules the Warner Bros and DC established with this franchise or he just did not understand the characters at all, Gunn makes the motley crew (from beginning to end instead of those who survived) rootin’, tootin’ hilarious.

He also includes a bit of that Guardians of the Galaxy vibe because Sean, his brother, is always in these films. That’s the only nitpick. Sam Raimi doesn’t always include Ted, but James seems to insist on a roster of talent he trusts (including Rooker too). While Weasel is goofy, he’s a knockoff character in the same vein as Scrat from the Ice Age movies, who can become tiring from overuse.

The true standout remains with Margot Robbie, who loves playing Harley Quinn. What Gunn presents here gives us a glimpse into that fever dream Harleen Quinzel must live in. Previous films of her slaughtering armies have not been as rosy as this because he complements the violence with songs that go beyond its usual interpretation. There’s something to hearing “Just a Gigolo (I Ain’t Got Nobody)” by Louis Prima as she walks through the prison with a passionate glee as machine guns blaze, and the blood becomes petals of flowers.

She’s just one part of a whole. The film emphasizes John Cena and Idris Elba more. They make up the Id and Ego that’s in constant conflict. Both are similar because they are mercenaries. The former is a different Captain America, the latter being blackmailed. Enough has been said about Elba playing Bloodsport like Steve McQueen.

Other members include Joel Kinnaman as Rick Flag, the titular Duke from GI Joe. His agenda is like Peacemaker’s (Cena), but here, he is a patriot for representing those ideals that Amanda Waller (Viola Davis returns to the role), the true puppet master, is against.

Gunn crafted a crazy film about autonomy. He also imbues his characters with life, and those needed back stories so we can sympathize with. Bloodsport is a father; to teach his kid what’s right and wrong means him doing right too, and this detail is explored. Plus, he never enjoyed being forced to the mission Waller had set him and selected inmates from Belle Reve Prison on—to destroy a laboratory on the island nation of Corto Maltese. She can pull the pin anytime since they all have bomb implants.

It seems many people above her job are nervous about what Project Starfish is. It’s been an operation that supervillain Gaius Grieves (aka The Thinker) is still working on. He’s a relic that the current political leaders keep around. Peter Capaldi proves he plays nasty quite well. He has a future in Hollywood as a recent report shows he’s wanting to find new challenging roles to play. He’ll always be remembered as The Doctor. This work shows a colder side which he made quite chilling. The only thing unusual the script didn’t consider is why The Thinker didn’t keep offsite backups.

I’m sure the kaiju monster (as named in the trailer) isn’t the only threat. One danger that needs to be introduced is the Black Mercy. If there’s supposed to be a bit of connective tissue between how villains are recruited into the Suicide Squad to that beast taking over the minds of others, just what Gunn wrote into the script sets up central fact: As more alien menaces appear to threaten subjugation, we’re sure to see the return of Darkseid.

Freedom can be won. While Suicide Squad is not likely to integrate with the rest of the DCEU anytime in the future, I’m hoping this rework proves that making more Rated R films is a must. It’s not so much about Zack Snyder (producer) insisting on it either. We’ve had only a handful of superhero movies (and a few tv productions) show this grit helps with reigniting interest in a cookie cutter product line.