There can only be one legacy after season one of Netflix’s Ragnarok has occurred. Anyone familiar with the Norse mythology knows it’s about the end times of this world; the clash of gods and giants devastates everything and what happens afterwards is simple: life is renewed. And for those who enjoyed watching this series, season two is confirmed!

In the work, THE CHILDREN OF ODIN: The Book of Northern Myths By Padraic Colum, after the original devastation, two humans survived. “They wakened, the world was green and beautiful again. These two fed on the dews of the morning; a woman and a man they were, Lif and Lifthrasir. They walked abroad in the world, and from them and from their children came the men and women who spread themselves over the earth.”

Even some of the gods survived. Odin’s brother Honir, Odin’s sons Vidar and Vali, Thor’s sons Modi and Magni. Another of Odin’s sons, Balder, was revived and they talked about what to do next. From there, we have the basis of Netflix’s show–which doesn’t go into great detail of where the bloodline of Magne (David Stakston) comes from. He’s a stout boy, and that’s all we know in episode one. We know nothing of his father. His brother and mother are all he has. Wench (Eli Anne Linnestad) is a shopkeeper who sees the teen perform a kind act and touches his forehead. Bolts of lightning appear in his eyes.

A significant part of the very short series is about him discovering his abilities. It’s less about him coming of age and more about him gaining confidence in who he is. With no one else around to prevent another destruction of mankind, Magne is like Spider-Man. He is very alone in his fight. 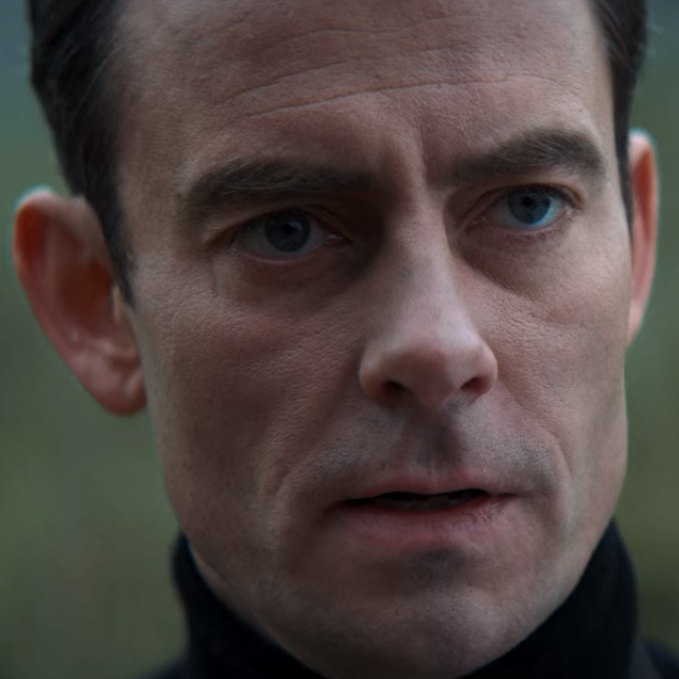 He has to deal with a family of shape shifting lesser giants (the Jutels) whose agenda is to bring about another Ragnarok. Vidar Jutul (Gísli Örn Garðarsson ) is the patriarch. Curiously, if the writers intended to connect this character to the mythical counterpart, then I am puzzled. Vidar is the son of the giantess Gríðr and god Odin (yes, he has many affairs). As for why he turned evil, we’ll never know. In what’s certain is in how he found others of his kind. He also saw the industrial revolution as the future.

Planned or not, the byproducts of their empire building (factories) are poisoning the environment. The citizens are clueless to a grander plan, but there’s a handful of youths who figure fighting it is possible. Sadly, the Jutel industry is helping the local economy.

When Magnus’s first friend finds something she should not have seen, she mysteriously dies. His mother Turid (Henriette Steenstrup) and brother Laurits (Jonas Strand Gravli) are no help to console Magnus. Between the character drama and teases of what the older world represents, the performances kept me glued. Stakston’s presence is different than Chris Hemsworth and I like it. The connections to mythology are different, and just hints at the classical. Instead of Zeus going up against his father, a titan, we have an incarnation of Thor going up against his traditional enemies, the Giants.

To help him, Fjor Jutel (Herman Tømmeraas) becomes a turncoat. his pampered lifestyle was something to be jealous of and suggests he may well be the high school bully, but there’s more complexity to this character which I loved as the season neared the end. His parents would rather he did not interact with humans as much but when push comes to shove, he rises to the occasion.

Laurits is a conundrum. Despite being the pretty boy of the family, the casting of Gravli feels very influenced by the popularity of Tom Hiddleston as Loki in the Marvel Cinematic Universe. The young actor is perfect, tossing in the same manner of goading at the older sibling. I like to see where season two will take this character when the episode “Atomic Number 48” sees him “coming out.”

No knowledge of the mythology is required to enjoy this series. While it helps for those in love with the Eddas, the modern direction suggests a different kind of end of days. Hopefully season two will offer answers and more backstory. The questions I wish to see answered are in who is Wench (is she a seer or something more?), which other gods have progeny and are these giants alone in their plans?

Everything that we need to know about the evil Jutel empire has been revealed. As for having a rise of resistance, that’s more dependent on the teenagers in this show saying it’s time to shape the world in their image than with the elders, even though a select few are immortal.

One thought on “Netflix’s Ragnarok Reviewed & Renewed for Season Two!”