The Paranormal Activity franchise ended many years ago. and some fans may argue it’s been a trailblazer for the found footage genre. 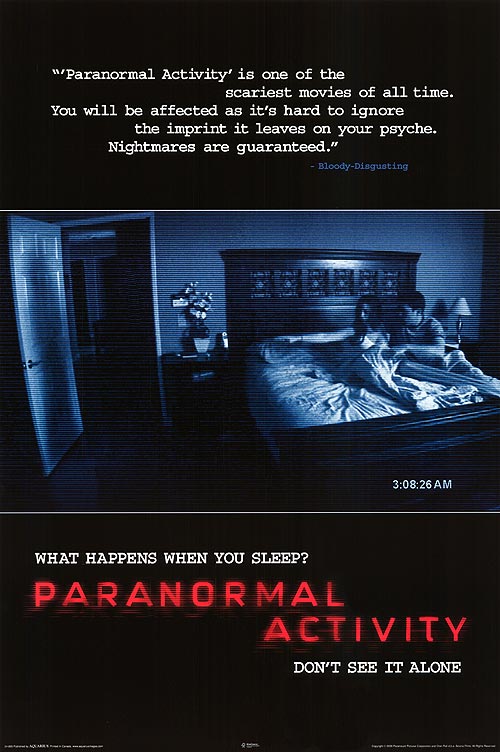 The Paranormal Activity franchise ended many years ago. and some fans may argue it’s been a trailblazer for the found footage genre. Anastasia Hanna of mxdwn.com thinks so, and I have the opposite opinion. It’s been 10 years since its wide theatrical release on Oct 16, 2009 (technically 12 if you count the film festivals), and the last film was about three years ago. Unless there’s a steady stream of this franchise, interest will pitter off.

The impact of this franchise faded with the passage of time. This series has always been a social experiment from the get-go. It’s designed to see how many people will react to the jump scares than to follow the trail of clues offered in all the movies made to date. Blair Witch did a better job with this particular subgenre of horror films since it felt realistic. It did not depend on sequels to make a lasting impact which gets imitated in comedy variety shows and in pop culture. After six films, there’s nothing to even truly recall other than the one ‘scary’ scene where the bedroom door swings open and the fate of Katie and Micah unwinds for all to see.

I tried to rewatch all the films. Thankfully, my home town still has one video rental shop and local libraries to track down all the movies. Seeing them back to back allows for understanding the back story more than the willy nilly of a variety of main characters. Other than Katie, I didn’t care much any of the new characters. The overall arc decomposed; not even the trip to the other side proved to be all that exciting.

The Blair Witch Project, the grandmother to the found footage format, left behind a better legacy. It spawned a whole ton of spin-off material. Paranormal Activity had two. Tokyo Night is an unofficial product released in 2010 and to suggest the franchise is not dead. A virtual reality game The Lost Soul for the PlayStation 4 was released in 2017. The former had some connection with the series and the latter, I did not get that far to find them.

In Marked Ones, one of the protagonists, Hector took a journey through time and space and he came crashing into the climactic moments which made up the terror in the first film. He would have left evidence (assuming the body was dragged away) when the police came crashing in to find Micah’s body. The camera containing the footage had had would have been discovered too. It’s strange that nobody is investigating! As other films showed that the families affected had friends, nobody ever bothered to follow up on their disappearances.

Surely somebody must be asking questions.

That’s one of the biggest plot holes this series does not address. The audience takes the narrative for granted as a sick look into a haunted house scenario. The backstory about black covens planning the end of the world never received a fair resolution.

There’s an evil just lurking around, and there’s no continuation to suggest if anyone can do anything about it.

Whoever is putting these tapes into a narrative for us to see has no conclusion. They are presumedly assembled for the movie going audience with that willing suspension of disbelief to assume ‘the movie’ is put together to allow for detectives to figure out what’s going on–and perhaps put an end to Tobi’s (a demon) arrival on Earth. As for whether that will happen, only Paramount and Blumhouse knows. In July 2019, they announced another film is in the works.

As for whether I’ll go see it or not (I’m a glutton for punishment), that depends if there’s any steam left to this film. Even in the real world, some paranormal activity fades over time. Without the uninitiated to give fear to fuel the fire, something new must be offered if it’s to keep this franchise alive. 3D cinema is still a hit and miss affair, and the only thing new in is storytelling in virtual reality. The big question is: are theatres prepared to offer this new medium en masse?