This film is Tatum’s most personal work to date; not only did he contribute ideas to the screenplay by long time writing partner Reid Carolin (with additional credit to Brett Rodriguez), but also directed. 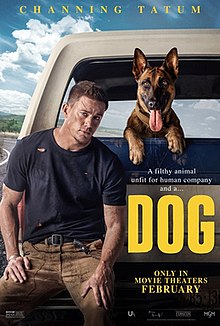 Channing Tatum hasn’t been forgotten after appearing in films like G.I. Joe and Kingsman: The Golden Circle. He did voice-over work and in recent interviews, he said the break was needed. He also talked about the life ahead, much like his character Briggs in Dog.

This ex Army Ranger with PTSD struggles to live day-by-day. He wants to return to duty, but after we learn he took too many hard blows to the head, getting another tour is difficult. After learning one of the team passed because of similar issues, the trauma isn’t over. But he has a second chance if he can bring Lulu, a dog, to Riley, her first owner’s funeral. Flying her over isn’t an option. Instead, it’s a trip from Washington State to Nogales, Arizona.