ego apartment is now out and on the loose with their self-titled debut album and we have tour dates!

Not every sound coming out of Japan is about J-pop and for music lovers, ego apartment is a welcome change of pace. This band quickly become a hot topic in the scene. They’ve been featured on numerous curated playlists both in Japan and overseas, and they are considered an act who are ahead of the times. Their track ‘FOG’ was included on Spotify’s ‘RADAR: Early Noise Japan 2022’ playlist, a selection of artists from Japan who are expected to turn heads in 2022. Their September release ‘Wrong with u’ has generated over 1 million plays on Spotify, cementing their reputation as a band with a bright future.

Following the success of the May 18 release of ‘FOG’, their self titled album ‘EGO APARTMENT’ was released June 1, 2022. The album contains 14 songs steeped in ego apartment’s unmistakable bedroom alternative sound, and it’s no exaggeration to say that each and every one of them is strong enough to be a lead track!

“We began writing these songs before deciding on a particular theme for the album, so in that sense, you could say that this is a sound that we could only express at this point in time. This is our first album, but it won’t be the last. See you on the next production.” 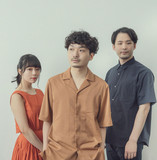 Made up of three members all born in 1998, ego apartment is a three-piece band based in Japan. They switch freely between two vocalists with different styles and lyrics in Japanese and English, producing an alternative sound that feels both analog and brand new.  The group consists of Dyna (laptop, bass, band leader), who hails from Saipan Island; Peggy Doll (guitar and vocals), from Sakai City, Osaka; and Zen (guitar, vocals), from Sydney.

The band switch freely between two vocalists with different styles and lyrics in Japanese and English, producing an alternative sound that feels both analog and fresh. Over Dyna’s tracks that are simultaneously filled with both melancholy and a sense of fun, Zen sings with a beautiful and distinctive voice, while Peggy Doll has a remarkable voice and extraordinary melody sense, resulting in a sound that is unique to ego apartment.

The September 2021 release of their fourth track ‘Wrong with u’ caught the attention of listeners around the world, steadily surpassing 1 million plays on Spotify. The band’s inclusion on Spotify’s ‘RADAR: Early Noise 2022’ playlist placed ego apartment as one of 10 breakthrough artists expected to hit the big time in 2022.