These paranormal investigators turned detectives in this fictional take cannot find plausible pieces of evidence to exonerate Arne. They show their love is indeed strong to defy evil, but where was that for the young man? None of their discoveries really helped the case. 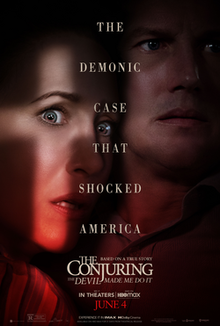 The reason The Conjuring franchise continues to endure is that the producers decided “The Devil Made Me Do It” (for the money). They want to celebrate the life and times of Ed and Lorraine Warren, paranormal investigators, as one of undying love from a cinematic perspective. The devil you know is in whether James Wan wants to continue writing-producing, changing details concerning their cases around so it makes sense in the cinematic chronology and build to some crazy endgame–to which there was none in our world’s version of the Warrens.

Not everyone knows Ed passed away from natural causes. The real-life couple who love to blame hauntings on demons did more book and lecture tours in their twilight years. They’re not of that right age to go chasing after evil like they did in their prime. Ed’s health was fading. By 2006, he was hospitalized and eventually crossed over into the afterlife. Lorraine continued the family business with their son-in-law and daughter. She passed away quietly in her sleep, in 2019, and there’s no insinuating meaning with the thirteen years she couldn’t be with her beau.

Their bond and never losing their faith are at the heart of this series. Patrick Wilson and Vera Farmiga definitely have the chemistry to bring this aspect to life. But as for the paranormal deeds or ill-gotten duties they’ve performed, that’s just best for a documentarian to explore. That person can also look at the associative disorder with other similarly styled cases. There was a case in the UK which , like in the film, The Exorcism of Emily Rose, which involved a priest, a homocide and another exorcism (loosely based on the real life case of Anneliese Michel) that went to court to explore if the devil did the deed here too.

I’m too deeply invested to stop. The larger arc has me curious. From the first film to Annabelle and The Nun series, the Disciples of the Ram want power. This witch cult is seemingly behind all the chaos; they want to curse the people who crossed them. Whether they’re better than the coven from the Paranormal Activity franchise, that’s a debate for Reddit users to argue over.

One pressing detail is in how Father Kastner (John Noble) has failed in his devotion and at celibacy. He had a child out of wedlock and hid her from the world. Despite this skeleton in the closet, he did some good and kept the Disciples from gaining power by locking away their artifacts. Unfortunately, his daughter took an interest and somehow was swayed to the dark side. This reveal is the only reason the third installment is intriguing. This subplot was never a concern in the original cases the Warrens were involved in, and had it, they would’ve talked about it in their lecture tours.

Zero motivation is revealed concerning this woman (played by Eugenie Bondurant), who cursed the home of David Glatzel (Julian Hilliard) and his sister Debbie (Sarah Catherine Hook), lives in. Very little information is offered about their parents, Carl and Judy, as they were background supporting characters with very little dialogue to suggest a background story. Maybe they did something to cause all this to happen? Or are they merely random victims? It’s easy to assume this mysterious lady is part of this Ram sect as either a member of or is a rogue agent.

The film introduces a possessed boy, David, and the Warrens preparing him for an exorcism. With no surprise, the ritual goes awry. Arne Johnson (Ruairi O’Connor) proves his love for the family in trouble by begging the devil to take him instead of the lad. This act of self sacrifice easily scores points with Debbie, the girl he’s dating, (and maybe the parents) as his actions go above and beyond. The evil should’ve dissipated.

Arne is slowly losing it though. He’s become more jumpy since that day. He kills his landlord and when the case goes to court, the defence declares a supernatural force made him do it because the Warrens said so. Insert a bit of unintentional laughter, and now the news media is all over it.

It’s rare to claim innocence because of spiritual possession. Most courts in this day and age would laugh this defence off. Had this incident taken place during Jacobean times, I’m sure the justice system would be open. It was the time when witch hunts and trials were common. There was a similar case in the UK, which conveniently got quietly shuffled away and barely recognized in this film. I doubt the Warrens helped throughout the proceedings in our world’s version of the trial. Ed and Lorraine’s involvement reeks of being very fictionalized since its pointing fingers at a greater problem.

These paranormal investigators turned detectives didn’t get plausible pieces of evidence to exonerate Arne. They show their love is indeed strong to defy evil, but where was that for the young man? None of their discoveries really helped the case. The narrative logic failure makes accepting this third outing hard. He’s still sentenced to serve 20 years of jail time, but gets early parole. All this film reveals is in how love continues to persevere for the Warrens and this boy who marries Debbie while in jail.

All fans have is just a piece of a puzzle to which at least two more films are required to show how all seven (I’m excluding La Llorona) movies tie together. The Ram is to blame, and isn’t likely on good terms with Valak (unless that’s another name he goes by). It may well have imparted bad mojo into the doll, Annabelle, but even then, who is truly the devil? I’m hoping a series bible exists because keeping track of who is cursing (or haunting) whom, means knowing what each past film, and upcoming ones represent for the destruction of humanity.