After five movies, it’s safe to assume most fans know the franchise well enough so that the intro isn’t needed. Disney didn’t want to bring Ray Romano, John Leguizamo, and Denis Leary back. 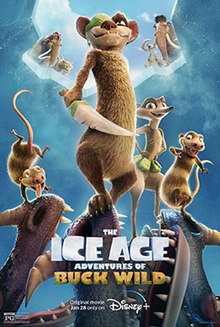 Even under the auspices of Disney putting Blue Sky Studios to rest, the Ice Age continues. Instead of continuing in the adventures of Manny and Elle, the mammoths, Diego the sabre-tooth tiger, and Sid the sloth, the focus shifts to the supporting characters of Crash (Vincent Tong) and Eddie (Aaron Harris). These two nutty possums are part of the main cast’s extended family and are Elle’s brothers. A quarter of the film reacquaints viewers of how this unlikely pairing came to be, and while it’s nice to get that recap, the other reintroductions feel unneeded. They remind viewers of the crazy dysfunctional aspect of this group as a whole.

When Disney don’t want to bring Ray Romano, John Leguizamo, and Denis Leary back, to still include them made this film feel lopsided. Not even the talents behind the possums were spared as we get new talents to voice them. The only returning performer is Simon Pegg as Buck Wild, a weasel who is no doubt a re-characterization of Captain Jack and Indiana Jones.

After a ruckus these two possums did to their extended family’s summer habitat. They believe it’s better to run away than work things out.

Somehow, they find their way back to the Lost World three films ago. They get rescued by Buck and through him, have to learn how to fend for themselves. All I cared to see was how important Buck would be to the future development of this franchise. Simon Pegg can do no wrong, and sadly, that’s not enough to carry a movie. He should’ve been offered a chance to write the story over Jim Hecht, William Schifrin, and Ray DeLaurentis. The latter two are better known for their offbeat work in The Fairly OddParents (contributing to 1/3rd of this show) and this film doesn’t quite hit the same beats.

My guess is that the executive producers insisted on a paint-by-numbers product instead of allowing this team to come up with their own original material. In what made this franchise a joy is in how Scrat appeared in the zaniest of asides during the story. This mascot of Blue Sky Studio is still beloved by fans and it’s a shame he’s no longer around. Instead of a classic Disney villian, the evil is with Orson, a dinosaur with aspirations to join the ranks of Dr. Evil from Austin Powers. But he’s not quite nasty enough to shake things up like Scrat ever did.

To be honest, it seems the Ice Age is over. What’s left isn’t worth frosting up again.