By Shawn Trommeshauser
(Dreaming in Digital)

Rogue Spirit is an action game set in an ancient Eastern nation of Midra that’s being taken over by demonic forces. It presents itself with a gorgeous Asian-inspired art style with a feel of shows like Avatar: The Last Airbender. You play as the ghostly spirit of a young prince who has been summoned to help save the land from an ancient evil that has been taking control of the people.

To fight against the demons and the possessed townsfolk, you have the ability to possess any of the human opponents that you can incapacitate. From knife-throwing dancers to hulking tribesmen who use claws, you take control of these fighters and turn their abilities on their allies.

Each time you leave the monastery that serves as your home base, you’ll find yourself at a randomly generated level full of enemies to fight and upgrades to earn. Despite being randomized, these levels have a handcrafted feel with how much background detail you’ll find as you look around. I honestly felt like I was playing a game like Diablo 2, only from ground level, exploring those randomly generated zones and finding what surprises each playthrough had for the player.

You can travel in your spirit form to make it more difficult for enemies to see you, or out in the open with a possessed body to fight anyone you come across. However, getting into combat is where I ran into problems.

Rogue Spirit is a modern brawler style of game, much like God of War, Bayonetta, or Castlevania: Mast of Eternity. You have a basic attack and a heavy attack, mixing your combos with secondary moves like dodging and parrying. While I can usually take down one or two enemies at once, eventually I get into a larger scale fight and spend too much time parrying attacks to actually fight back, eventually resulting in my getting overwhelmed. Fortunately, there doesn’t appear to be a penalty for death as you simply respawn at the monastery with a random enemy type to possess.

I’ve had the best luck surviving as the ‘Shadow’ type of enemy, surviving around three minutes before falling, while only lasting 1-2 minutes with any of the others. I’m not certain if it’s my own skills that are failing me or if the game is unbalanced. The enemies you fight can withstand much more damage than your own character, and I have yet to find a reliable way to recover lost health as I play, leading to death after only a few enemies as they whittle away my health. 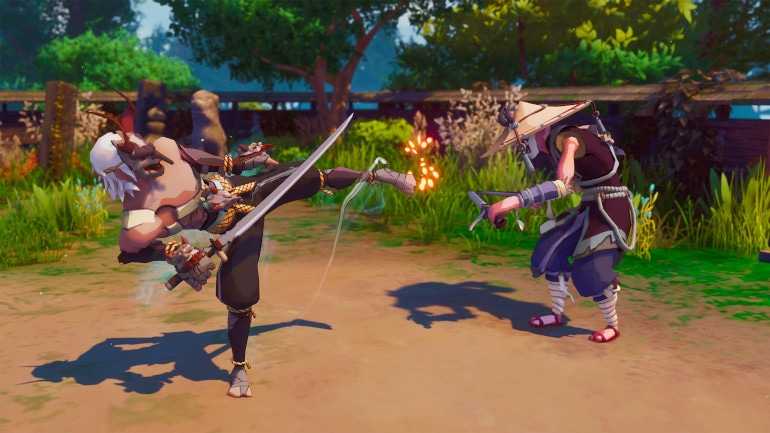 Upgrades to your character should eventually stack up enough to make the game more survivable, but I wasn’t able to get to that point and see more of the game. I kept coming back to the game over a week or so, but constantly dying to the first group of enemies I encountered was very disheartening, killing my enthusiasm to grind away at the game when it takes almost as long to get back to the combat zone as it did for me to play through my previous attempt.

I see a lot of potential in the concept, and the possession mechanic is an awesome take on a rock/paper/scissors approach to fighting, but I think it needs more refinement before it really finds its groove. It’s worth checking out when a proper demo becomes available, or if it sounds like something you might enjoy! You may have better luck with it than I did.

Disclaimer: An Early Access version was provided for this review.
2 out of 5 Stars