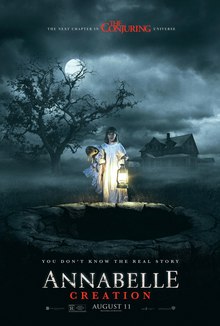 By Ed Sum (The Vintage Tempest)

Hollywood loves their origin movies. No franchise can be considered complete unless the first film sets up everything required for later films to follow. I consider some works refreshing when that story is told later. When Annabelle: Creation is part of the Conjuring universe, to understand the terror requires waiting for all the pieces to come together. The Warrens (a paranormal investigative couple) were never vital even though they are the heroes of sorts in the core films. Paranormal enthusiasts like me want to know more about the mysterious demon nun bothering the Warrens and the entity said to live in the doll.

This movie remotely references one fact, if the claims by Ed and Lorraine Warren is to be believed. The porcelain figure is inhabited by the soul of Annabelle Higgins. Just why she is malicious might be because this girl is troubled. When you’re trapped for eternity in an object, perhaps as a result of a binding spell (accidental or not) and you are not allowed to move into the light, I would be fairly pissed off too.