As for what writer/director Matt Reeves has in mind, it’s safe to say we’ll see more threats and it’ll come from terrorists. 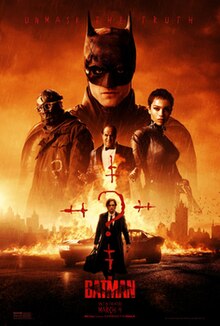 The war with gangsters is only going to be bloodier in The Batman. This movie is part one to a three film arc because we’re not offered a clean ending. Confirmed news include a spinoff series about The Penguin and Arkham Asylum. There may also be other empires who’ll descend on the power vacuum left behind after a certain Al Capone type meets his untimely death. Gotham City will never find peace. It’s not in the cards. Not even the Mad Hatter has those kinds of grandiose plans, but I’d be beside myself should that be the case!

As for what writer/director Matt Reeves has in mind, it’s safe to say we’ll see more threats from terrorists. It’s not likely the Justice League will help; an accidental entry from a parallel Earth might appear, but that’ll be it. This product is very standalone–much like The Joker–and we’ve always known the hero operates alone.

Curiously, we don’t have an individual like Harvey Dent in this take. The notorious Two-Face he becomes is needed. Despite being used in older films, his role in helping clean up the city is important. Chris Nolan’s take showed how his influence eradicated crime but it was at the cost of Dent’s life–a legacy Batman and Commissioner Gordon helped enact. We may see this character return in Reeve’s second film, which still has to be greenlit, but it’ll be hard to say.

There’s a lot of talk concerning bringing a different version of Mr. Freeze to the fore, but I’d rather see Clayface, Bane or Mad Hatter. I’m a huge fan of the latter, since his ability to use technology to brainwash and hypnotise individuals is very dangerous! For the other two, I can see how neuroscience can get used to recreate their abilities.

Batman won’t be fighting the mob alone. He will need help. Would he ally with The League of Assassins? It’s not likely since the leader, Ra’s al Ghul, appeared in Nolan’s trilogy and to bring him back may feel for some too copycat. It’s very possible he’ll have to step into another nest, and see the Court of Owls deal with rebuilding Gotham would be terrific.