The Addams Family 2 doesn’t key into what made the first film fun to watch. 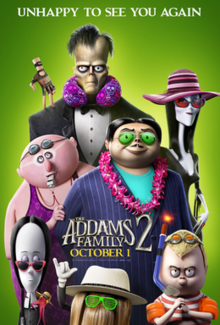 The sequel to the animated 2019 Addams Family reboot will not click with everyone. It has the feel of not adhering to the style and satire Charles Addams crafted. Instead of focussing on the ooky, it’s more like a regular teen angst drama where Wednesday (Chloë Grace Moretz) is more of the star than ever. She believes she isn’t a genuine Addams. This has Gomez (Oscar Isaac) fearing she wants nothing to do with her kin anymore. He hatches a plan to take the entire family on a summer vacation!

As a result, this movie could’ve worked more for Summer than Fall. When considering this movie is one of many works with a rescheduled release date, it suffers from the dilemma of when it can be released in countries attempting to restart within a pandemic. I would’ve been okay for an even longer wait to maximize interest, and perhaps changing up the focus on who the stars are.

When the story is lacklustre, perhaps it’s best to offer it when there’s no other huge film competing for movie-goers dollars. Venom 2 also opened the same weekend.

Part of the film lingers on this teen’s constant doubts about who her father is. She’s smarter than the average kid and is ready for college! When Mr. Mustela (Wallace Shawn) attends a local science fair and sees her latest experiment is a success, he approaches her and claims Wednesday is his progeny. Was she truly accidentally switched at birth? The parents can’t give a straight answer (as they normally do), and instead of dealing with the issue at hand, Gomez just hopes the vacation will help tighten the bond between parent and child.

No matter what the outcome, this narrative can be used for any dysfunctional family series. It doesn’t key into what made the first film fun to watch. The first was about the entire family versus a mad home  renovator with a secret agenda. It builds to a terrific confrontation where the township learns something about how everyone can get along.

As for how long this reboot will last, perhaps it’s best to see Cousin Itt the focus. He deserves a spotlight, especially when Snoop Dogg is behind this portrayal.