To anyone who has not heard of Sound! Euphonium, a primer about this series is in order. It was originally a series of novels by Ayano Takeda which was quick to become a franchise. After its initial publication in 2013, a manga soon followed, along with an animation series and now movies. Our Promise: A Brand New Day follows Kumiko in her second year at Kitauji High School. Not only does she have to make the new band of recruits in this high school symphony work in harmony, but also has to deal with a certain romance potentially coming into her life.

Altogether, I could not help but be reminded of the National Film Board of Canada’s documentary, That Higher Level while watching this anime. We are examining what makes these characters unique, and where they will go next when they have graduated from Kitauji High School.

Kumiko has a lot on her hands when tasked to mentor the first year recruits for their high school orchestra. She recognizes that they all have something special to contribute and makes managing them tough. Her senpai is gone; she has no one to bounce her thoughts with of for help.

The genre is more focussed on Shōjo melodrama and that can make watching this work tough. You can’t jump in and understand this franchise as easily without either some research or at least seeing the television series. 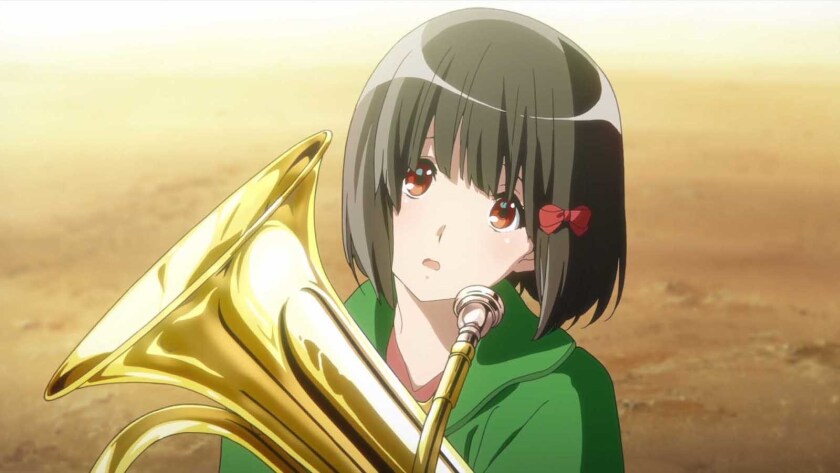 Or in this home video release’s case, the bonus material provides the necessary exposition to understand this film at least. The Q&A with actor and director Christian la Monte helps examine the themes; he reveals this movie is about moving on rather than being stuck in those roles that once defined you or you got typecast into. The romance between Kumiko and Shuichi is certainly explained and we get to know la Monte too. We also get to meet Laura Post, the voice of Reina Kousaka and Xanthe Huynh, the voice of Satsuki Suzuki in the English dub.

I’m more intrigued at the classical song selection which accompanies this series. Maurice Ravel‘s Boléro is a score which commands, and is performed more than once in this anime. When concerning plot, it’s tough to say if writer Jukki Hanada and director Ayano Takeda choose specific numbers to reinforce the themes behind this film. Richard Wagner’s Die Meistersinger von Nürnberg is not a simple opera; a few unassuming similarities are noticeable if you’re familiar enough with this plot; if not, I doubt the soundtrack choices are mere coincidence. These teenagers want to achieve that higher level and quite often, it means taking responsibilities. Quite simply, it’s all about earning respect.